History of the Famous World Series of Barbecue

A gastronomical competition? What is more mouth-watering than BBQ? I hear you loud and clear meat lovers all over the world.  American Royal World Series of BBQ got you covered, it originated in Kansas City, United States where it all started as a small competition that has become the most single largest barbecue competition event in the world.

Comprising of 400-500 barbecue teams competing in 4 different categories for their own title. It is the most awaited, most grand competition and festival. Where competitive barbecue enthusiast and pit masters flock from all over the world to skillfully showcase their signature sauces, rubs, marinades, techniques, preparations and styles which comes all together through a cook off and only the best of the best will remain to be standing and hit the title Grand Champion.

All kinds of meat and BBQ is presented during the event making it hard for event participants and judges in choosing the finest of them all. Its quite fascinating as well that these teams already has a lot of fans and people who support their favorites since its been a yearly event. The Culinary journey and simultaneous stimuli of tastes never disappoint the crowd. It is not only the hustle and bustle of the cooking competition that livens the event, there is more! live local music, BBQ demos, Delicious BBQ, local food, cocktail garden, beer, BBQ Marketplace vendor fair of authentic local products and a full line up of kids activity. 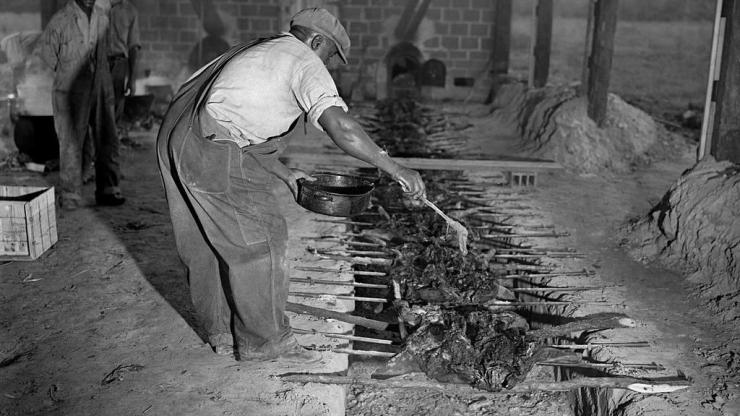 The roots of American Royal before having the barbecue event dated back in 1899 which was known for having the National Hereford Show, selling of purebred cattle. It featured 541 Herefords, with 300 Herefords that has an average selling price of $334. Estimated attendees was 55,000.

A tent in the Kansas City Stockyards, the agricultural hub of the Midwest is where it was held.

The show had officially became the American Royal in 1902 after C.F. Curtiss, the dean of agriculture at the Iowa State College of Agriculture, made comparison to the show with the British Royal Agricultural Fair. Attendance continues to overflowed as the show opened up to more breeds and species and soon it became an established Kansas City tradition.

The official American Royal Horse Show occurred 1st in 1905 with the help of the prominent horse trainer Tom Bass. Loula Long Combs performed in her first American Royal horse show on the following year. Loula belongs from a prominent Kansas City family who were known in the country for owning some of the best horses. Both Tom Bass and Loula Long Combs pioneered and became prominent figures of the American Royal Horse Show. She was often greeted with a crowd standing ovation while entering the ring on her phaeton with two of her Boston bulldogs riding with her. Loula continued to compete at the horse show for over 50 years, often winning. Today the American Royal features several horse shows varying from renowned trainers and stables.

The two events that that were soon added at the American Royal season are the rodeo and barbecue contest. The first American Royal Rodeo was held in together with the first dairy show during the spring in 1949. The dairy show and rodeo dissolve operation in 1951, but the rodeo made a surprised comeback in 1965 and remained a yearly spring activity. In was moved to the fall season in 1976 with the first American Royal PRCA (Professional Rodeo Cowboys Association) who sanctioned the rodeo. The rodeo usually highlighted with concerts of famous prominent country singers including Kenny Rogers, Crystal Gayle, and Garth Brooks. The first American Royal Barbecue Contest was held in 1980, it started as small competition and quickly grew in popularity. In 1998. It officially became the ‘The World’s Largest Barbecue’ with 340 competitive teams competing.

Today, The World Series of Barbecue serves as the largest fundraiser for the American Royal.

American Royal is a non-profit organization founded in Kansas City. Providing opportunities for youth and adults from all around the country to compete in Livestock Show, Rodeo, and Horse Shows. Many people know American Royal thru World Series of Barbecue. Through this event it made it possible to open the door to raise over $1 million annually for youth scholarships and support the agriculture education programs. This event therefore play a big part in shaping the country’s future

Events/ Entries/ Other Things to do 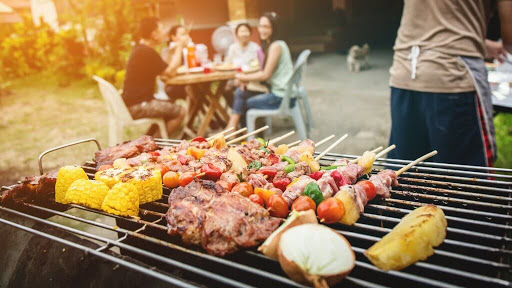 You can access registration for the American Royal World Series of Barbecue here. The health and safety of the guest is highly prioritized by the management. With changes due to COVID-19 timelines and contest information may change. If event details, guidelines and/or operation detail change and update competing teams will be notified and the website will be updated as well.

The World Series of Barbecue Open Meat Competition is available to any and all teams who would like to come down and show off what they got, specially their BBQ cooking skills. There is no qualifier for the open competition. The contest is sanctioned by KCBS and participating teams must turn in at least one protein from the four main (Chicken, Pork Ribs, Pork Shoulder/Boston Butt and Beef Brisket).

For Invitational Competition many teams and contest organizer have been forced to cancel or postpone contests and may not have the chance to qualify for this year. A former Grand Champion will be eligible teams for the invitational participants from a qualifying contest through their partnering sanctioning bodies from June 30,2018 – July 1, 2020.

The Festival will be a two-day event. It will have a live local music, delicious food, beer and cocktails, a car show, a BBQ Marketplace and activities for the kids. There is surely something for everyone to enjoy.

Pitmaster Fred Robles of Weslaco, Texas-based owner of Rio Grande Meat is a two-time winner in American Royal World Series of Barbecue. Rio Valley Meat BBQ team was named 2017’s World Barbecue Champion at the 2017 World Food Championships in Orange Beach, Alabama on Nov. 12. Robles took home a $10,000 prize for the win. At his first attempt Fred not only made it to top 10 but claimed the title. But there is no stopping him as he claimed his victory at the 40th American Royal World Series of Barbecue in 2019. He won several competitions as well across the country and given back to the community who with the help of Big Poppa Smokers and Smithfield, donated $8,500 to Estrellas’s House, a childhood advocacy center in Edinburg. Truly he knows how to extend his blessings to others

Pitmaster Darren and Sherry Warth of Iowa’s Smokey D’s BBQ took home the Grand Champion title on Sept. 17, 2018. The husband and wife team who owned a restaurant have taken the competitive circuit by storm above 466 competing team not only won the 39th Grand Champion title but it’s the 3rd time in six years that they snatched that title. Also they are on top on the game in some other categories as well which really says about a lot about their passion for their craft.

What a Newbie in BBQ Competition Could Expect?

A participant Todd Johns of Plowboys Barbecue as the Grand Champion at the 2009 Invitational, Open-Reserve Champion in 2010, Grand Champion awards for his brisket in 2009 and his pork in 2008. Gives his insights about the vibes, what was it like and he says it’s like a party and a family reunion, with some 600 teams competing including a 20 international teams representing 11 countries in the flagship food events. He explains that each team cooks about 120-150 pounds of meat per contest, 2-4 butts, 3-6 slabs or ribs, 1-2 dozen pieces of chicken, 2 whole briskets. Participants should arrive at the event with everything they plan to use. There are a couple of different experiences, John says that it depends to what your weekend looks like. Some are in the invitational, some open, and some both. He noted that for the teams that are cooking the invitational, some the open, and some cooking in two very important back to back contests. By the time you’re starting your turn-ins for the invitational, you’re starting your food for the open. They have to pace themselves and be focused he added.

Anything Interesting about Winning Recipes Entries/Etc.

Most of the recipes have their own uniqueness in the smallest detail. The interesting part is one needs to be meticulous choosing meat and farm supplier, It might sound very simple but it is really a big game changer, it is the meats premium quality. Only the top quality meats can really produce the best result but of course with the Chef’s cooking skills and mastered cooking methods. What catches the BBQ enthusiast more engaging in this event is that the American Royal World Series of Barbecue are selling the blend of rubs which the champions used. The good thing is they can replicate the BBQ dish on their own at the comfort of their home.

The winning Entry dishes keeps the competition on flick and very much alive. It is for sure setting the standards that makes the game on for being the best. Yearly setting restaurant owners, chefs and pitmasters vigorously training, developing and mastering their techniques to win this prestige title everyone’s been dreaming to have. As it does not only represents perfection but also the beauty of the challenge it brings that is worth the pain and the hustle.

Any Other Relevant Topics that may be helpful to someone looking to know more about this event.

For locals that are interested to be a partner vendor of the event this is what you are looking for. Some information on the site should be considered such as; you will gain exposure to the fans, exhibitors, and participants that will attend American Royal events as a vendor in the American Royal Marketplace. At the heart of the American Royal’s Grand Hall, the bustling Marketplace is centrally located and is your chance to reach out to this high foot traffic. This is your very good chance to tap into a niche that is excited to be in Kansas City. A display of chic Western apparel and decor, and horse and livestock merchandise to agriculture materials, our event participants are looking for rare and exceptional finds. For any concerns, please reach marketplace@americanroyal.com.

The Sauce Contest is part of the American Royal World Series of Barbecue Competitions, this contest is the largest BBQ sauce contest in the world with nearly 400 entries from countries across the world. The entry will be judged in a blind tasting on their appearance, texture, taste alone, and taste on unseasoned barbecue meat. Categories are Mild, Hot, Vinegar, Mustard and Specialty.  The top awarded sauce in each category will be crowned first place in that category and the overall highest score will be named the 2020 Best Sauce on the Planet. The contest is not cancelled. In fact, the deadlines for submitting sauces have been extended and registrations/shipments will be accepted until further notice. For submission deadlines and other details review the event packet for updated information at the official website: https://www.americanroyal.com/bbq/spring-events/sauce-contest/.